Obesity In The United States Is At Epidemic Levels

.Obesity has become an epidemic in the United States. The statistics are more than alarming. In fact, nearly 50 percent of American adults will be obese by the year 2030, and about 25 percent will be severely obese, carrying about 100 pounds of extra weight.

These latest statistics were just published in the New England Journal of Medicine.

These data were collected from a large, decades-long federal survey. However, as in previous studies on weight, it’s common for respondents to underestimate their weight. Therefore, the researchers adjusted for self-reporting bias to get a clearer picture of where the United States is headed. 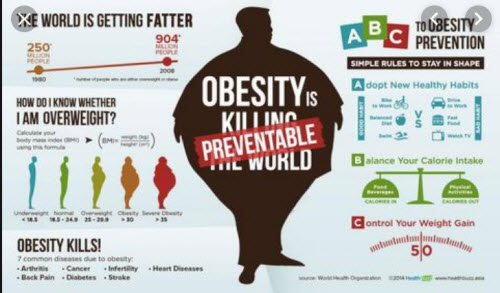 What’s more, in the next ten years; severe obesity — defined as having a body mass index (BMI) of 35 percent or higher  — will be the most common BMI category nationwide. Every demographic is represented. Among women it’s (27.6 percent), black non-Hispanic adults (31.7 percent) and low-income adults (31.7 percent).

The rising obesity trend is highest in middle-aged and older adults. More than twice as many adults 40 and older will be severely obese by 2030, compared with 1990.

BMI (Body Mass Index) measures a person’s weight divided by his height. For example, 18.5 and 24.9 is considered normal; 30 and above is obese.

Obesity: It Can Kill You

Although this condition (illness) appears not be a concern with the public, it  does lead to several of the nation’s biggest health problems. These chronic illnesses include type 2 diabetes, heart disease, and some. All three are leading causes of death in the United States.

The two leading catalysts for this are: Increasing BMI and aging. Middle aged adults and senior citizens are at much higher risk for these diseases.

In addition, high BMI levels often lead to liver disease, osteoarthritis and respiratory problems. In total, these diseases, cost the U.S. more than $147 billion in medical expenses each year, according to the Centers for Disease Control and Prevention (CDC).

Fighting and treating obesity is very difficult. People love to eat and good food in the U.S. is plentiful and tastes good. Education is the first step. Learning to eat healthy nutritious meals and snacks is the first step. It’s a tough hill to climb — but the rewards are great. Your health and quality of life depend on it.

There’s no better time to start, then now. Get going.